Arab Design Pioneers and the Propagation of a Modern Visual Culture 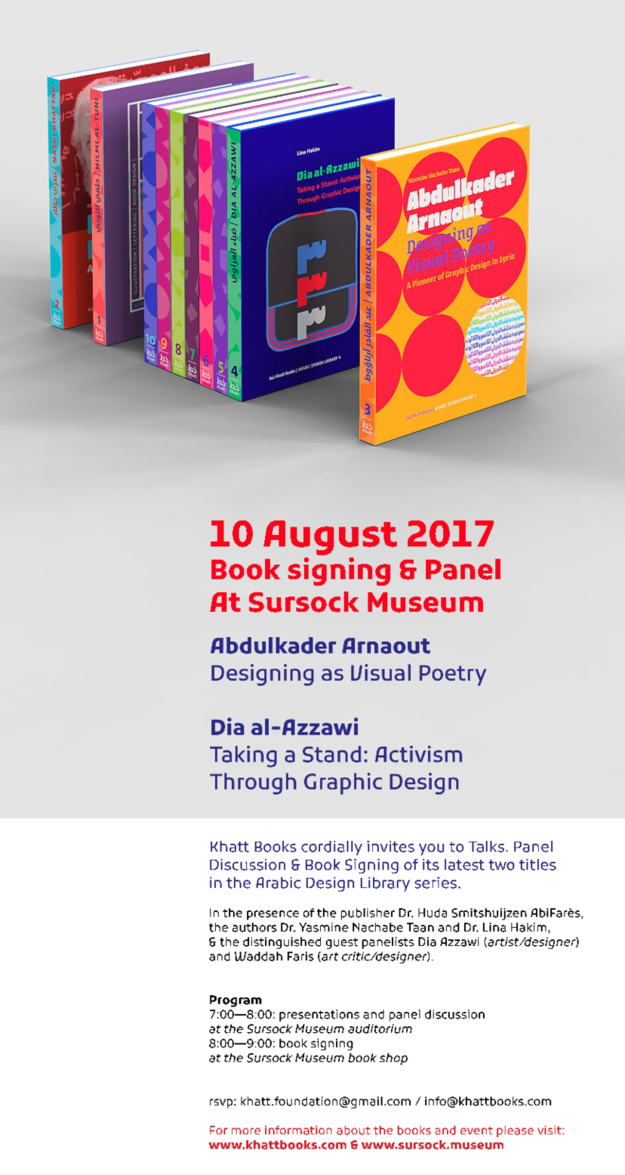 Each book presents the works and the pioneering role of the respective designer in the propagation of a modern Arab visual culture. The books presents unpublished new research and rich historical facts and critical analysis of cultural production in the late 1960s to late 1980s. Both the Iraqi artist Dia al-Azzawi and the Syrian designer Abdulkader Arnaout are renown but their graphic design work is largely undocumented. The Arabic Design Library series of concise monographs on inspiring design achievements from the Arab region, highlights the work of prominent Arab typographers, graphic designers and illustrators. This series establishes a visual record of Arab design history of the 20th century, and paves the way for critical writing, by Arab authors, on design from the region.

Huda Smitshuijzen AbiFarès is the Founding Director of the Khatt Foundation and Khatt Books. Based in Amsterdam, her professional, cultural, and educational activities extend from the US, to Europe and the Arab World. She holds a PhD from Leiden University, an MFA from Yale University, and a BFA from Rhode Island School of Design. She is a member of AGI (Alliance Graphique Internationale). She specializes in multilingual typographic research and design, and has published several books on this topic. She is author of Arabic Typography: a comprehensive sourcebook (Saqi Books, London, 2001), Experimental Arabic Type (Saatchi & Saatchi, Dubai, 2002), Typographic Matchmaking (BIS Publishers, Amsterdam 2007), Typographic Matchmaking in the City (Khatt Books, Amsterdam 2011), and Arabic Type Design for Beginners (Khatt Books, Amsterdam 2013), and a number of book chapters and essays on multilingual communication and contemporary design in the Middle East. She contributes articles on design in the Middle East to academic journals and industry magazines like Baseline, Bidoun, Design Issues, and others. She specializes in bilingual typographic research and design. She curates exhibitions, organizes collaborative design research projects between Europe and the Middle East, and is editor of the Khatt Foundation online network of Arab/Middle Eastern designers (www.khtt.net). She has worked as a designer for a number of years, in the US, Europe and the Arab World. She has taught typography and graphic design at the American University of Beirut. She was the Chair of the Visual Communication Department for three years at the American University in Dubai. She currently supervises research of PhD candidates at Leiden University’s Arts Program and works as a design curator, writer, designer, and publisher.

Yasmine Nachabe Taan is associate professor and chair of the department of art and design at the Lebanese American University in Beirut. She holds a PhD in Art History and Communications Studies from McGill University. Her research focuses on gender representation, design, media, photography and visual culture in the Middle East and North Africa. She publishes on visual culture in a number of international journals. She has illustrated more than 20 children’s books and has participated in a number of residencies in Berlin, Cairo, Beirut and Bratislava. Her artwork has been exhibited in New York, Berlin and Beirut. She is the author of Hilmi al-Tuni, Evoking Popular Arab Culture (Khatt Books, 2014).

Lina Hakim (b. 1979 in Beirut) is a London-based researcher, designer and artist. She is currently lecturer in Visual and Material Culture at Kingston University, London and has recently held an Andrew W. Mellon Postdoctoral Research Fellowship at the Victoria & Albert Museum, London. Lina holds a BA in Graphic Design (American University of Beirut, 2001), an MA in Book Arts (Camberwell College of Arts, 2004) and an MRes and PhD in Humanities and Cultural Studies (London Consortium, Birkbeck, University of London 2009; 2013). Her doctoral thesis was titled ‘Scientific Playthings: Artefacts, Affordance, History’.

Dia al-Azzawi (b. 1939 in Baghdad) completed a degree in archaeology from Baghdad University in 1962 and started his artistic career following his graduation from the Institute of Fine Arts in Baghdad in 1964. He co-founded the New Vision group (al-Ru’ya al-Jadida) in 1969 [with Rafa al-Nasiri, Mohamed Muhraddin, Ismail Fattah, Hashim Samerchi, and Saleh al-Jumaie] arguing in its manifesto, Towards a New Vision, for the socio-political and cultural responsibility of artists. Al-Azzawi worked at the Department of Antiquities in Baghdad from 1968 to 1976, and, following his move to London in 1976, served as art consultant at the city’s Iraqi Cultural Centre from 1977 to 1980. He has been very active in promoting Iraqi and Arab arts and culture through various publications, exhibitions and public events. Al-Azzawi’s wide-ranging creative output encompasses painting, sculpture, print, drawing, illustration, editorial design and book arts. His interest in literature and poetry manifests throughout his career in projects ranging from publications in collaboration with authors to formal explorations of image and text. Socio-political concerns, historical testimony, and the question of identity are also prominent themes throughout his practice.

Waddah Faris is a designer and art critic living and working between Barcelona and Beirut. He began his education in architecture in 1959 then transferred in 1961 to applied graphics, which was his preferred field of study. He returned to Beirut in 1963, joined Khayyat Publishing designing books for Franklin Publication, then joined al-Nahar newspaper where he was involved in editorial design work for the weekly literary supplement. He also worked for al-Nahar Press Services to design their specialist publications. He also designed some of the catalogues for the Baalbeck Festival (1973 & 1974), printed at the Imprimerie Catholique in Beirut. It was in the 1973 catalogue that he introduced the concept of sponsorship of Lebanese artwork reproduction as substitute to conventional advertising pages. He also introduced contemporary graphic image and design treatments that showed ‘jazzy’ visual experiments and interesting use of colors, inks and printing techniques. In 1972, he founded Contact Art Gallery, and was invited to join the graphic design studio Art Shop in Beirut as a partner. He organized in the 70s in Beirut several art events and exhibitions that brought to the spotlight the Arab avant garde of that period. He then moved to Paris in 1979, where he established his Gallerie Faris and continued to promote Arab (and European) contemporary art. He lives in Barcelona since 1984.

For more information about each book and to have a look inside, please visit the Khatt Books website at www.khattbooks.com