For the first time in history the earth’s population is more urban than rural. This means that for most people on this planet, the city has become their natural habitat. When in this context we speak of growth and blossom, terrain and flow, or use other natural metaphors, we speak in fact of engineering, architecture and design. We talk about the city as a landscape that we have created ourselves and continue to shape. Shaping a place is as much about imagining it as it is about building. —Text from ‘Design for the Urban Landscape’. Experimentadesign. Space and Place. Amsterdam 2008. 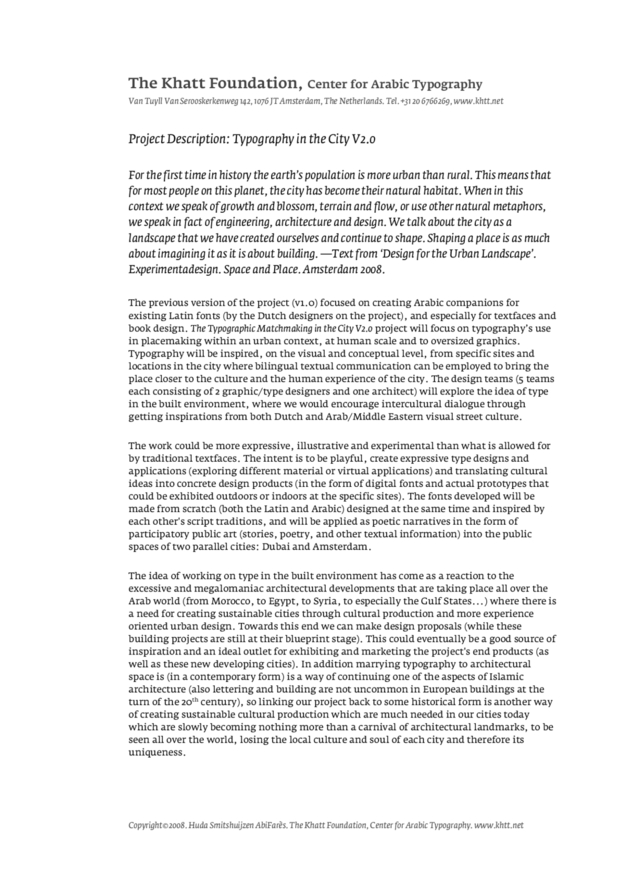 The Typographic Matchmaking in the City V2.0 project will focus on typography’s use in placemaking within an urban context, at human scale and to oversized graphics. Typography will be inspired, on the visual and conceptual level, from specific sites and locations in the city where bilingual textual communication can be employed to bring the place closer to the culture and the human experience of the city.

The design teams (5 teams each consisting of 2 graphic/type designers and one architect) will explore the idea of type in the built environment, where we would encourage intercultural dialogue through getting inspirations from both Dutch and Arab/Middle Eastern visual street culture.

The work could be more expressive, illustrative and experimental than what is allowed for by traditional textfaces. The intent is to be playful, create expressive type designs and applications (exploring different material or virtual applications) and translating cultural ideas into concrete design products (in the form of digital fonts and actual prototypes that could be exhibited outdoors or indoors at the specific sites).

The fonts developed will be made from scratch (both the Latin and Arabic) designed at the same time and inspired by each other's script traditions, and will be applied as poetic narratives in the form of participatory public art (stories, poetry, and other textual information) into the public spaces of two parallel cities: Dubai and Amsterdam.

The idea of working on type in the built environment has come as a reaction to the excessive and megalomaniac architectural developments that are taking place all over the Arab world (from Morocco, to Egypt, to Syria, to especially the Gulf States...) where there is a need for creating sustainable cities through cultural production and more experience oriented urban design. Towards this end we can make design proposals (while these building projects are still at their blueprint stage). This could eventually be a good source of inspiration and an ideal outlet for exhibiting and marketing the project's end products (as well as these new developing cities). In addition marrying typography to architectural space is (in a contemporary form) is a way of continuing one of the aspects of Islamic architecture (also lettering and building are not uncommon in European buildings at the turn of the 20th century), so linking our project back to some historical form is another way of creating sustainable cultural production which are much needed in our cities today which are slowly becoming nothing more than a carnival of architectural landmarks, to be seen all over the world, losing the local culture and soul of each city and therefore its uniqueness.